Ahmedabad is famous for its historic monuments city. Jagjamur is especially famous for Muslim architecture. Among the geometric shapes of the mesh, the fine wood engraving of the treewell is very soft.
Book download karva mateni link sauthi niche aapel che. Thank you all friends

Temple of the sun
The Solar Temple of Modhera, situated about 6 km from Mehsana in north Gujarat, was built in the time of Solanki Raja Bhimdevam. This temple is to the east. All the temples are oriented east. The reason for this is that when the sun rises in the early morning, its rays will enter directly into the sanctuary and the whole temple will be bright. It was an artistic peak on the sanctuary that has been broken. It is also a circular orbit around the sanctuary.
It is fun to observe and enjoy the subtle elements of nature. Life is a sea full of joy, travel is its eye. 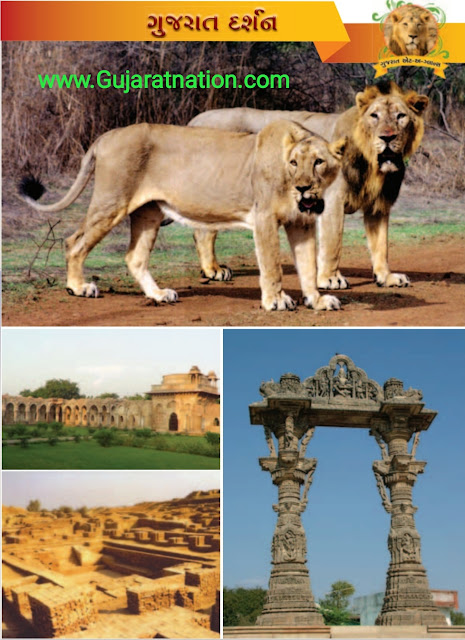 We left with the students and teachers at 3:00 pm to catch the 'Saurashtra Darshan' tour from the big thorny high school. About 3 km from the big fork Not far away is the Somnath Temple. We were surprised to see it, I saw Animesh Nay, the temple's artistic carving, sculpture, architecture was wonderful. The structure of the temple was peaked, the lamps on the temple were subtle carvings.


Entering the temple were the temples of Hanumanji, Baliadeva and Ganapatiji. In the sanctum sanctorum of the temple was Shambhu's shivling, behind which was the idol of Goddess Parvati. The aarti there was wonderful. There were special gardens around the temple, people tired in the garden relaxing.

Behind the temple is the unique sea, the waves there consecrate everyone. Visitors from all over the country come here to enjoy it. Horseback riding and horse riding are available here. Its fun to enjoy is enormous. Bugs, slippers and trains are planned for the errands. Ice pellets, coconut water are available there.
Thus the sea is considered to be the third eye of Shiva. Here is the dwelling of Brahma, Vishnu, Mahesh.


Except for the year-long pilgrimage, the pilgrimage to the greatest pilgrimage of the Jains takes place regularly over the course of eight months and a small number of devotees continue to migrate to this pilgrimage.

Phagan Sud Teras is also such a glorious festival. On this day, more than 1.5 lakh pilgrims come to touch Giriraj. Shatranjay Tirtha is a faith of Jains living in the country and abroad, whose other Jain pilgrimage cannot come.
On the day of Phagan Sud Teras, six villages of Shatrunjaya are specially visited. The journey involves approximately fifteen-sixteen kilometers of walking distance. Despite the rugged and steep slopes of the six villages, the young men cut the sect with a smile. Thousands of Sravakas and Shrivakis, including hundreds of monks and nephews, travel to six villages on this day and reach Siddhwad.


Sidhwad is the end of the journey for the six villages. Six Gao Yatra begins with 'Jay Talati'. Here the fateful ones start a formal yatra by chanting chanting. 'Jai Talati' is the front palate towards the village of Palitana and Sidhwad is the backward talati towards the village of Adipur. This place has a huge tree. This tree is known as Siddhwad as millions of souls have attained beneath this tree in the past.


Six Gao Yatra is the way in which Shatranjay pilgrims travel all the way to the shrine. Among the Jains, there is a strong belief that the pilgrims who reach Siddhwad by completing six village excursions on an open foot attain Siddha status in very few places.
Adipur village is situated on the outskirts of the village Sidhwad, which is named after Lord Adinath. As many times as Adinath Bhagwan touched Shatrujayan, he came by the Adipur road. After the founding of the village of Palitana, the currency of the road stopped and the 'Jay Talati' road became glorious.