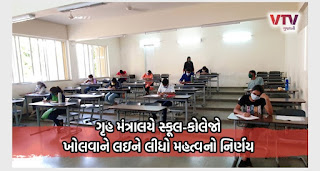 Schools and colleges across the country have been closed for the last two months amid a lockdown announced in India due to the corona virus. In the meantime, there has been a lot of speculation about starting school-colleges and an important decision will be taken soon. Schools in the Green and Orange Zones may be open until July during the lockdown. However, in the midst of all this, the Union Home Ministry has clarified the opening of school-colleges.