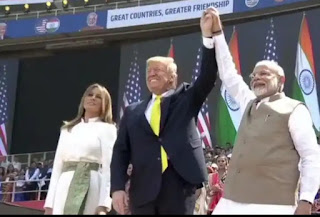 5 months ago the United States welcomed your great Prime Minister at a giant football stadium in Texas and today India welcomes us at the world's largest cricket stadium right here in Ahmedabad.
We will always remember this remarkable hospitality. India will hold a special place in our hearts. PM Modi started out as 'tea wallah', he worked as a tea seller. Everybody loves him but I will tell you this, he is very tough
PM Modi you are not just the pride of Gujarat, you are living proof that with hard work & devotion, Indians can accomplish anything at all, anything they want. The Prime Minister is a moving story of an incredible rise.

All over the planet people take great joy in watching Bollywood films, bhangra, and classic films like DDLJ and Sholay. You cheer on great cricketers like Sachin Tendulkar and Virat Kohli
There is difference between nation that rises by coercion and one that rises by setting people free -- that is India.

Extreme poverty in your country will be eliminated in next 10 years.
Modi started off as a humble 'chaiwala'; he worked at cafeteria and is shining example that Indians can achieve anything.

I'm pleased to announce that tomorrow our representatives will sign deals to sell over US$ 3 Billion, in the absolute finest state of the art military helicopters and other equipment to the Indian armed forces.

Both countries are united in defending citizens from threat of radical Islamic terrorism. Under my administration we unleashed full power of American military on bloodthirsty killers of ISIS. Today ISIS territorial caliphate is 100% destroyed. Monster Al Baghdadi is dead
As we continue to build our defence cooperation, the US looks forward to providing India with some of the best & most feared military equipment on the planet. We make the greatest weapons ever made. We make the best and we are dealing now with India.

As the Ministry of Foreign Affairs on Thursday disclosed that the prime organizers of the ‘Namaste Trump’ event at Motera stadium in Gujarat, is a newly-formed private entity called the ‘Donald Trump Nagrik Abhinandan Samiti,’ the Congress party has raised questions over the amount being spent by government for an event organized by a private organisation. 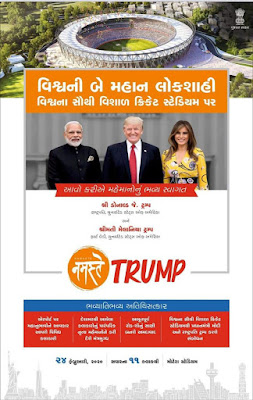 Learn spoken English and Grammar from Hindi, Indonesian, Thai, Arabic, Malay, Urdu, Malay, Bangladeshi Bengali, Bengali, Punjabi, Telugu, Tamil, Kannada, Marathi, Gujarati, Oriya, Assamese, Malayalam, Chinese, Portuguese, Turkish and Nepali. A free English learning course used by over 50 Million learners for spoken English, grammar, and vocabulary building.Hello English by CultureAlley is the number 1 ranked free Educational App, and the best free App to learn English.At the weekly media briefing MEA spokesperson Raveesh Kumar referred to the group as the ones who are responsible for organising the event, while answering a question.He also highlighted that the event would be organized on the lines of Howdy Modi event of Prime Minister Narendra Modi held in Houston, USA, as he referred to the joint rally Modi and Trump last year. 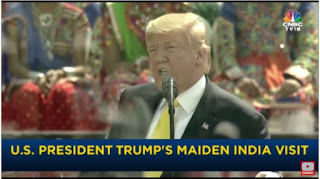 - 10,000 words Dictionary: Learn new words, and hear their pronunciation.- Play with friends: Multi-player games and quizzes to practice English with learners across the globe- Chat Bots: Learn English with chatbots- Know Your Rank: Win coins and know your global and city rank.Landing at the Sardar Vallabhbhai Patel International Airport, Trump will travel down a 22-km spruced up road to the Gujarat Cricket Association's newly constructed Sardar Patel Cricket Stadium at Motera, Ahmedabad, with Prime Minister Narendra Modi. About 125,000 people (not the 7 million Trump had claimed) will line up on the way from the airport to Sabarmati Ashram, which the US president is expected to visit.