Reliance will now charge Interconnect Usage (IUC) for calls from Jio to another network. The company announced on Wednesday. However, on its second day, on Thursday, Vodafone Idea made a big announcement about the IUC. Vodafone Idea tweeted, saying that they will not charge customers any different way to make calls from other networks. 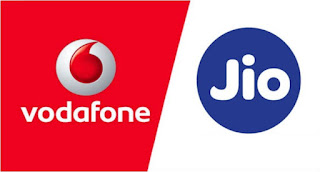 According to Vodafone-Idea, you do not want to place an additional burden on consumers. We do not want customers to think before making a call. Vodafone tweeted, "Vodafone will not be charged for making calls to other networks." Enjoy the promise we made to you. Free call actually on Vodafone Unlimited plans.
Reliance Jio announced the IUC plan on October 9. The company said that now customers have to pay 6 paise per minute to make calls from Jio network to other mobile network. After that, Reliance Jio launched top-up packs of various calls to other networks.
Vodafone-Idea has said it does not want to place any additional burden on its customers. That the customer has to think about every time you make a call, call on-net (Vodafone Idea to Vodafone Idea) or call offnet (other network with Vodafone Idea).

Vodafone has tweeted that there is no charge for calling from Vodafone to another network, so enjoy what we have promised you. Vodafone Unlimited plans are really free.
Not to mention that calling on the remaining telecom networks from Reliance Jio is no longer free. And from the large company affiliated with it. Calling on the remaining networks of Geo users will cost 6 paise per minute.
Until Jio, users had to recharge for data only, with SMS and Unlimited Voice calling available to users free of charge. Now you have to recharge the IUC top-up separately for calling from Jio to the rest of the network.
GUJARAT NATION